Engaging in office politics may be necessary to get ahead, but presidential candidates set a poor example. 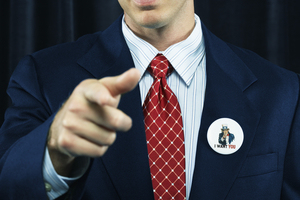 Although 62 percent of workers interviewed by the staffing firm Robert Half said involvement in office politics is at least somewhat necessary to get ahead, many hesitate or refuse to take part. And the idea of “playing politics” may seem all the more repugnant as the 2016 presidential hopefuls ramp up their campaigns.

There’s much to learn from even the dirtiest political tactics, however. That’s because politics “is sort of like bacteria that has a healthy level but at a certain point becomes toxic,” says Julie Jansen, a career coach based in Stamford, Conn.

Since this is true of both presidential and workplace politics, it’s instructive to see how politicians so often push things to the point of toxicity, and which toxic stratagems can be toned down to a healthy threshold and used with integrity.

Political rhetoric these days often says less about a candidate’s platform and qualifications than the opposing candidate’s defects. Americans claim not to like it but seemed resigned to settle for “the lesser of two evils.” Faced with such cynicism, it might not harm a candidate to try to convince voters that the other guy has the sharper horns and pointier tail.

But trash talking in the workplace almost always backfires. It can make the offender look petty, insecure and otherwise unfit for leadership. And seeking to destroy workplace rivals can actually defeat the purpose of engaging in office politics.

“Office politics is understanding the inner workings of an organization and using it to your best interest,” says Joel Garfinkle, an executive coach based in Oakland, Calif.

Since an organization and its inner workings are composed of and operated by people, any one of them could control a critical lever. “So don’t make enemies, don’t burn bridges, don’t make others look bad, don’t backstab, don’t complain about management and don’t gossip maliciously,” Garfinkle warns.

Politicians rely on individual donors, companies and political action committees to finance their campaigns. So candidates ingratiate themselves with deep-pocketed supporters, and donors, in turn, use their cash to curry favor with politicians. This can lead to questionable quid pro quo arrangements and sometimes outright corruption.

In business, however, “You scratch my back, and I’ll scratch yours” doesn’t necessarily raise concerns; in fact, it’s part of effective networking. “It’s the way of the world. It’s give and take, and I don’t see anything wrong with it unless it involves something unethical or forces someone outside of their comfort zone,” Jansen says.

It’s putting in a good word for someone and asking them to do the same. It’s helping others and getting their help in return, she explains.

Whereas deference to donors and lobbyists can lead to a politician’s downfall, in business currying favor with the right people can catapult an employee to leadership. “Building the right relationships and understanding how to leverage those relationships to provide the demonstrable value that will get you rewarded” is as effective as it is political, says Kevin Berchelmann, president of the management consulting firm Triangle Performance, based in Spring, Texas.

Be strategic and target people with influence. “Identify the people in the organization who sit around a table and decide who gets promoted and who doesn’t,” Garfinkle says. “Ask, ‘Do they know who I am? Do they know what I do? Do they know my value?’”

Make a list of 10 to 15 influential people to get to know, he advises.

Folks with influence aren’t necessarily higher on the organizational chart. “Don’t kid yourself. That gal in marketing who has the COO’s ear is a much better friend than enemy,” Berchelmann says, so snub her at your own peril.

Sycophants are disrespected if not despised in politics, and the workplace isn’t much different although offenders are typically labeled brown-nosers – or worse.

“The biggest consequence of brown-nosing is losing the support of your peers,” says Jeff Cohen, founder and managing partner of the HR consultancy Bold Road, based in New York.

Employees need the cooperation of peers to perform effectively on teams, projects and day-to-day work. Moreover, positive performance reviews and promotions are no longer just about impressing the boss. Peer feedback, in the form of 360-degree reviews, often factors in, Cohen says.

However, to some degree, “flattering the boss and being nice to those who might have influence in your career development” is politically savvy, says Linda S. Teza, president of Enlightenment International, a publishing, consulting and training company based in Jacksonville, Fla.

To avoid being labeled the office lackey, she adds, “Pitch in eagerly, add value and give others their fair share of the credit.”